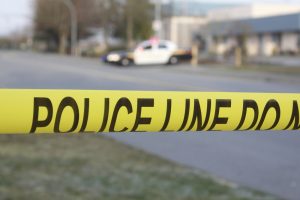 An unidentified law enforcement officer was shot, but sources said he was “clipped” and was not seriously injured.

The shooter has been “arrested and secured,” said Santa Fe HS Assistant Principal Dr. Cris Richardson. He was arrested about 20 miles outside Galveston, a second person has been detained as well.

The suspects were described as a male but no further information is provided.

Several other students, as well as an officer, was injured in the shooting.

Joe Gamaldi with the Houston Police Officers Union tweeted, “Please keep the officers in your prayers as one officer is being life flighted to the hospital.”

Students described the gunfire, which broke out about 7:30 a.m.

Junior Liberty Wheeler, 14, was in class when she heard 5 shots ring out near the art room.

Her teacher told them to run toward the theater department’s storage room, where they hid for 45 minutes before being escorted outside by the SWAT team.

“You could smell the gunpowder that came from the gun,” Wheeler recalled as she was escorted out of the building. “We were all scared because it was near us.”

No more information is being revealed at this moment.