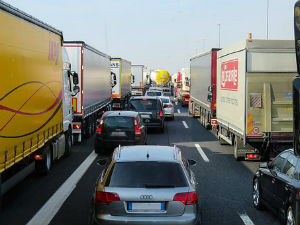 Due to the incredible volume of trade that happens between the U.S. and Mexico on a daily basis, Bob Costello, the American Trucking Associations chief economist and senior vice president of international trade policy and border crossing operations, said he hoped President Donald Trump would reconsider the idea of closing the border. According to Costello, if it did happen it would be best to exclude trucks.

Costello went on to make a statement emphasizing how trucks haul more than $1.1 billion worth of goods back and forth from the Mexico border every single day. According to Costello, this equals more than 25,000 truck crossings in either direction on a daily basis. Let’s face it, that’s an incredible amount of trade activity.

Costello broke down the dynamics of all this trade even more. “Last year, just to haul freight to and from Mexico, the American trucking industry employed over 31,000 U.S. truck drivers and nearly 47,000 total workers to support this truck-transported trade.”

Furthermore, this aggregate business produced more than $6.6 billion in revenue last year alone. Also, U.S. truck drivers something close to $2 billion in wages to haul all this cargo.

It goes without saying that free and open trade is crucial to the vitality of the U.S. economy and even more vital to the trucking world. If this flow of trade is disrupted then it would have a seismic impact. That impact could total up to $18 million a day. Plus, there’d be even further consequences. If trade at the border shut down for up to four days, several U.S. factories will shut down. This would create even more economic headaches.

Costello goes on to theorize that the shut-down would stimulate an even greater slippery slope. He imagines that ultimately a recession would come into play. With all that being said, it would be wise to keep the borders open for business.

What do you guys think? Is Trump’s threats of border closing a disaster waiting to happen?

How to Promote Trucking as a Profession?