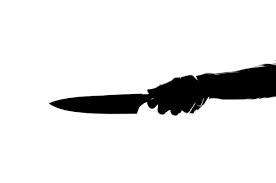 A stabbing attack in South Austin this morning leaves 1 dead and 3 injured. The erratic behavior of the suspect leads authorities to believe the attack random in nature.

The attack began when a man appearing to be in his 20s ran inside and began stabbing. A witness, Stacy Romine, who lives nearby spoke with the Austin American-Statemen. She saw the man rush into Bennu Coffee and attack an elderly man. Several bystanders leapt to action. They attempted to stop the man from attacking the elderly individual.

Romine herself used a cart to block the stabbing man’s exit. He managed to escape, however, and made his way to the roof.

When authorities confronted him, he leapt headfirst towards the pavement. “You can hear a sound of his neck breaking and then he didn’t move,” said Romine. Medics attempted CPR, but Romine said she didn’t see the suspect move.

Medics arrived at the 500 block of South Congress Ave at around 8:12 am. They pronounced one man in his 20s dead. Two more men, one in his 50s and another in his 20s, were taken to the hospital in critical condition.

The suspect remains in police custody.

Austin’s Friday morning stabbing incident follows a series of stabbings putting communities on edge. Last week, a man attacked a Hanukkah celebration with a machete. That episode wounded 5 in what police call a hate-fuelled attack.

In a Paris suburb, another knife attack left one dead and two more injured Friday morning.

Last November, a 28-year-old man went on a stabbing spree on London Bridge, killing 2, injuring 3. That particular attack gained international headlines for the heroism of intervening bystanders, one of whom utilized a decorative tusk to fend off the attacker.

None of these incidents are connected.