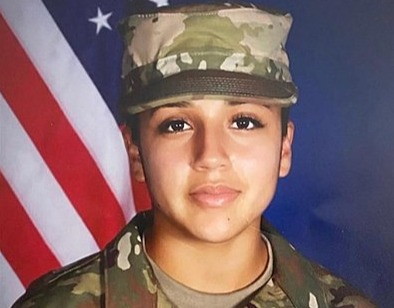 Following the recovery of the body of Vanessa Guillén, Congresswoman Sylvia Garcia met with leaders to discuss a need for change. Authorities found Guillén’s body just a week ago. She had been mutilated, burned, and buried in three separate holes. She reported facing sexual harassment prior to her disappearance.

Guillén disappeared two months ago. Officials point to fellow soldier Aaron David Robinson as the suspect. Robinson admitted to his girlfriend, Cecily Aguilar, that he killed a female soldier. He confessed to using a hammer to strike her in the head. Authorities report that Aguilar then helped him dispose of the body.

On July 1, Robinson took his own life. Local and federal officials were closing in on him when he shot and killed himself. However, Aguilar is still alive. She faces one count of conspiracy to tamper with evidence. She awaits trial at the Bell County Jail.

I Am Vanessa Guillén

Since Guillén’s disappearance, a movement has been growing. Other servicewomen have set social media abuzz. And they are all discussing their own sexual harassment cases.

Trista Vclek is among those speaking out. She was stationed at the Goodfellow Air Force Base in 2011. She was just 18 years old when she arrived. Vcleck reports that other soldiers invited her to a birthday party. Upon arrival, she realized that all of the other guests were men.

Vclek believes someone drugged her drink that night. She posted to Facebook that the soldiers then took advantage of her. She tried to report it. But her superiors wouldn’t listen. She sustained serious injuries. Yet none of her attackers faced consequences. One advanced to a position of leadership in the air force.

On Friday, Garcia of the 29th District of Texas met with other leaders to talk about systemic change. Among her collaborators were reps from the League of United Latin American Citizens (LULAC) and the Army Secretary, Ryan D. McCarthy. “We have to listen in order to create enduring change,” McCarthy tweeted.

Domingo Garcia, the National President of LULAC, stated, “When a woman puts on the uniform and agrees to serve our country, and takes that oath, she should be treated equally to the men in the Army. And when they’re not, when they’re abused, and their cries for help are not heard, there is a definite problem that we have to deal with.”

They have since demanded that the Army rally behind a full and independent investigation. They ask that the Defense Department Inspector General’s Office handle the Fort Hood case.

Voices continue to rise up all over the country. For instance, on Sunday, July 5th, protesters marched from Republic Square Park to the gates of the Texas State Capitol. They cried out her name as they walked.

The Service Women’s Action Network also spoke up. Director of communications Martina Chesonis offered a statement about the “I am Vanessa Guillén” hashtag. “This is a version of the military’s #MeToo. Women feel empowered in shared experiences, and the hashtag is doing the same thing.”

At Least 8 People Dead after School Shooting in Texas