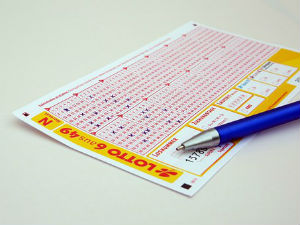 AUSTIN, TX – Looks like somebody in Austin is walking around with pockets a little fuller… Though they may not know it yet. Nevertheless, somebody has the winning ticket out there, and it was purchased at a Southwest Austin H-E-B. This is according to the Texas Lottery.

According to the Texas Lottery, the quick pick ticket winner who was able to match the five numbers in the Mega Millions game bought the ticket at the H-E-B on West Slaughter Lane and Escarpment Boulevard. Yep, right here in our own backyard.

Just for a quick primer on how the game actually works. Players select five numbers from a field of up to 70 and a Mega number from a field all the way up to 25. Now, it should be noted, had the ticket mimicked all five numbers and the Mega Ball, the player could have been in line to have won $367 million.

As per the Texas Lottery game rules, the winning ticket is required to be claimed no later than 180 days after the draw date which happened Tuesday. Furthermore, the ticket must be presented for payment while also fulfilling the Texas Lottery Commission’s validation requirements.

The Man, Who Killed a Woman in a Car Crash, Has Been Identified